Surely a loving God would never allow this much pain? | Bigger questions
Skip to main content

Surely a loving God would never allow this much pain?

In 1882, the great German philosopher Friedrich Nietzsche made the controversial claim: 'God is dead'. Has God been killed by his strongest opponents?

In this episode, host Robert Martin speaks with Dave Miers (lead pastor City on a Hill, Brisbane) about suffering. They share some light moments on 'first world problems', but sensitively probe the painful and difficult area of suffering. They speak about Stephen Fry's objections to God in the face of such evil and reflecting on Habbakuk's story and through Jesus there is hope in the midst of pain.

This Bigger Questions episode is a re-edit and re-release of Episode 12 (recorded under the show's former title, hence the absence of episode number).

Now the big question for today is suffering - a loving God would never allow this much pain. Now, I’m kind of hoping that our conversation now won’t add to the sum total of human suffering and misery. But before we talk about suffering, can you tell us a little about yourself and your own Christian journey - what made you want to follow Jesus? What convinced you to become a believer?

Without attempting to trivialise suffering. Our smaller questions were on first world suffering.

God vs suffering - the problem

Now whilst the suffering encountered in first world problems is really quite trivial. Genuine suffering is far different.

The presence of suffering in our world is a common reason to reject the existence of a good God. A loving God, it’s claimed would never allow this much pain. God therefore is either evil, impotent or imaginary. In early 2015 atheist comedian Stephen Fry demonstrated this point when interviewed on Irish television. The host asked Fry to suppose it was all true and asked what he would then say to God when he died and was confronted by the Almighty.

“How dare you? How dare you create a world to which there is such misery that is not our fault. It’s not right, it’s utterly, utterly evil. “Why should I respect a capricious, mean-minded, stupid God who creates a world that is so full of injustice and pain. That’s what I would say.”

“Bone cancer in children? How do you react to Stephen Fry’s comments?

Now this problem, the problem of evil is not simply a philosophical question, it’s one intrinsically connected with reality and our experience isn’t it? Where is God in the mess? Why doesn’t he do something? Sometimes you don’t necessarily want a solution, you just want the pain to end, would that be fair?

In Logos Live we reflect on the Scriptures, the Logos, and today’s passage comes from the Old Testament book of Habakkuk. And here Habakkuk asks ‘Where is God in the mess?’

Now many people here might not be familiar with Habakkuk. Habakkuk sounds a bit like the name of a Pacific Islander rugby player, but the name means wrestle or embrace. Now Habakkuk begins with an impassioned cry. Habakkuk 1:2-3:

How long, Lord, must I call for help,

but you do not listen?

Or cry out to you, ‘Violence!’

but you do not save?

3 Why do you make me look at injustice?

Why do you tolerate wrongdoing?

Destruction and violence are before me;

there is strife, and conflict abounds.

Should we feel uncomfortable with his tone? ‘How long, Lord, must I call for help, but you do not listen?’

Is there a point of connection here with our suffering or pain?

It seems that the philosophical objection that God can’t exist given the presence of suffering isn’t in Habakkuk’s mind is it?

So what is Habakkuk saying?

In Habakkuk's frustration he reflects particularly on the suffering associated with injustice. Interestingly a world full of injustice was also part of Stephen Fry’s objection. Habakkuk says says in 1:3, Why do you make me look at injustice?

He cries out for justice. But we have to be careful with this call for justice don’t we? How far do we want him to go?

The question is often asked question of why doesn’t God do something about the suffering and injustice in the world. But would it be fair to say that he has actually done something?

Mark 15:34 recounts the crucifixion of Jesus:

And at three in the afternoon Jesus cried out in a loud voice, ‘Eloi, Eloi, lema sabachthani?’(which means ‘My God, my God, why have you forsaken me?’).

Then in verse 37 we read that Jesus dies.

How does the death of Jesus affect the way we look at the ‘problem of suffering’?

Now the ending of Habakkuk is fascinating:

Though the fig-tree does not bud and there are no grapes on the vines, though the olive crop fails and the fields produce no food, though there are no sheep in the sheepfold and no cattle in the stalls, 18 yet I will rejoice in the Lord, I will be joyful in God my Saviour. 19 The Sovereign Lord is my strength; he makes my feet like the feet of a deer, he enables me to tread on the heights. For the director of music. On my stringed instruments.

It seems that despite all the suffering that he observes, the hunger, crop failure and business failure - yet the author rejoices in the Lord?

God vs suffering. A loving God would never allow this much pain? 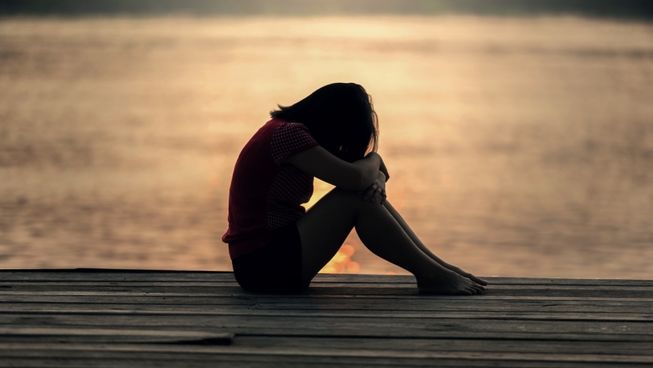 Bigger Questions
Greg Restall
14 Jul 2019
Atheist Ricky Gervais says that the 'very definition' of God is a logical impossibility in this universe. Is he right?
END_OF_DOCUMENT_TOKEN_TO_BE_REPLACED