Ep 102: How do I overcome my limitations | Steph Judd

We all face limitations - time, abilities and even the greatest limiter of them all: death. How can I live in light of these?
Bigger Questions
Speaker(s):
Stephanie Judd
Bible reference(s):
John 1.10-18
Date:
Sun 27 May 2018
Jesus' life
Work-life balance
limitations
Humanity

They discuss a variety of the limitations that we all face: time, abilities and even the greatest limiter of them all - death. How can I live in light of these?

A conversation with a young mum who appreciates limitations every day that will help you find value peace and purpose.

Join us as we ask Stephanie Judd some bigger questions.

Steph reading your bio it says you also previously trained as an opera singer but that you "never get enough time to sing”, although your son particularly likes your rendition of Incy Wincy Spider. I’m intrigued, when you do an opera rendition of nursery rhymes is it more or less effective in helping get a child to sleep?

How much you know about attempts to overcome limitations when it comes to eating competitions?

Pushing ourselves to the limit

Now Steph we could have spent this entire episode of Bigger Questions discussing speed eating competitions – there are SO MANY of them out there. Then of course there is the popularity of books like The Guinness Book of Records – I used to love poring over them as a kid. But why is this? Why are we fascinated with pushing ourselves to the limit?

For me personally I love cycling and on my bike on the bar which runs between my legs I have a sticker which says “Shut up legs”. It’s a phrase that was popularised by German cyclist Jens Voigt – the idea being that when your legs start hurting tell them to shut up and keep pushing. That’s symbolic of what we’re talking about isn’t it?

But it’s not just in the areas of sport or extreme eating is it – how might we try and live without limits when it comes to everyday life – work, home, family and so on?

Are there particular areas where you personally have tried to push yourself to the limit?

The limits of being human

What are some of the ways that being human simply means needing to live with limitations?

We often say sleep is for the weak, but actually sleep is simply for humans isn’t it?

We mentioned earlier your opera singing background, but you never get enough time to sing any more – another limitation! I’ll admit there are times when I’ve felt torn between two big
options in my life I’ve wished I could just live two lives so I could take both paths, but part of being human means I can’t can I?

We mentioned earlier that we often assume limits are negative. In fact in our society today – especially the working world – we’re often encouraged to not admit limits, to ask for help, are we?

And yet, James Packer was recently applauded when he stepped down as Crown Resorts director admitting it was for mental health reasons. We seem confused don’t we as a society – our workplaces encourage us to push ourselves beyond the limit, but at times we can also applaud the admission of weakness.

When we think about part of being human is to have limits I can’t help but think of the greatest limiting factor – death. That’s a pretty significant limiter isn’t it?

Steph can you tell us what convinced you to become a Christian believer?

The Bible’s Answer – The incarnation of Jesus

Now Steph you’re convinced that it’s this Christian faith that helps us answer today’s Big Question. In particular the person of Jesus. Tell us who you understand Jesus to be.

We’ve just been talking about part of being human is to have limits. So if Jesus is God does that mean God has limits too?

“The Word became flesh and made his dwelling among us” (John 1:14)

God chose to take on limits – that’s an extraordinary claim isn’t it. Personally how does that make you feel?

How Jesus’ incarnation helps us

Ok, so God took on human limits in Jesus. But how does that help us overcome our limitations?

So Jesus dies so we do not. But we all still die – isn’t that limitation still present?

“To all who received Him [Jesus] he gave the right to become children of God”. John 1:12

How has your faith in Jesus personally helped you overcome limitations?

In light of all we’ve explored what would you say to your Year 10 self back in the science classroom?

So Steph, how do I overcome my limitations? 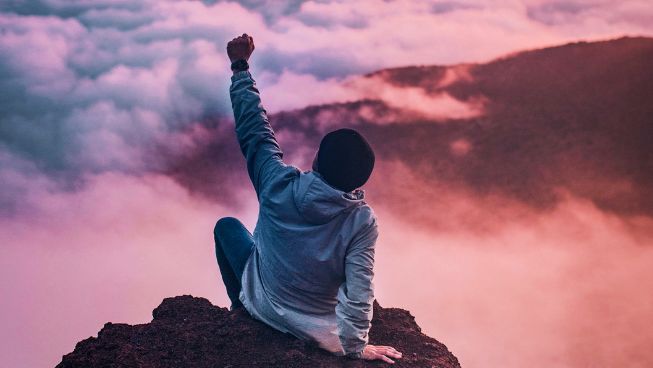 Bigger Questions
Andy Judd
22 Oct 2017
City on a Hill pastor Andy Judd shares about the value and weaknesses of wisdom.

Bigger Questions
Peter Adam
How can you be joyful and happy at Christmas when you're depressed?
END_OF_DOCUMENT_TOKEN_TO_BE_REPLACED