Isn't the Bible corrupt and untrustworthy?

The Bible is considered by many as corrupt, outdated and untrustworthy. Richard Dawkins in The God Delusion asserts that the Gospels are not reliable accounts of what happened in the history of the real world. He claims that the Gospels were “copied and recopied, through many different Chinese Whispers generations”.

In episode 63 of Bigger Questions, we invited Gillian Asquith (lecturer at Melbourne School of Theology) to help us explore the trustworthiness of the Bible.

Is the Bible just a bunch of ‘Chinese whispers’?

For those unfamiliar with the term, ‘Chinese whispers’ is a game whereby a message is passed on from person to person in a ‘whisper’ with the final person revealing the message passed down, usually distorted. Dawkins’ claim that the Bible we have today is a distorted from the original text by comparing it to a game of ‘Chinese whispers’ is stretching. Whilst the Bible has been transcribed over centuries and translated into several different languages by many different individuals, there is plenty of evidence which suggest the Bible documents we have today are as close as possible to the original texts the authors wrote.

Do the Dead Sea Scrolls challenge the Bible at all? Some say the character of Jesus was a fictitious invention.

Answering this requires a bit of a dip into history. The Dead Sea Scrolls included Old Testament texts, but none which mention the person of Jesus. Historians claim the authors of the Dead Sea Scrolls came from a small monastic community had moved away from Jerusalem, frustrated with the control of the Romans and the way the Jewish temple was run. They believed that God was going to send them his agent of change that would deliver them free from the Roman control and restore order in the temple - this is in line with prophecies in the Old Testament. They had transcribed texts they studied back in Jerusalem. On this basis, some believe the early Christians in the first century read the Dead Sea Scrolls and copied the ideas from this monastic community thus coming up with a fictitious Jesus Christ.

Gillian shares her insights at this point of our Bigger Questions conversation: “In reality, all Jews in the first century had some form of expectation that God would do something miraculous and free them from the Romans to re-instate them as the rightful ‘owners’ of their land of Israel. The monastic community was operating within that mindset and Jesus himself would have known he was stepping into that cultural expectation. So there was a shared understanding, shared expectation and shared cultural environment. It does not mean that there was a direct dependence between the truth of Jesus and what was written in the Dead Sea Scrolls; it simply confirms a shared cultural expectation of the era depicted in the documents.”

Is it a problem that we don’t have original manuscripts of the Bible?

We don’t have any originals (called ‘autographs’) but we have a staggering number of manuscript copies. Currently the number is well over five thousand. Let’s give this some perspective by considering how historians view and value manuscript translations to some other historical documents.

Tacitus is considered to be one of the greatest Roman historians. The most dated manuscripts we have of his writings is about one thousand years older than the original. There are about twenty versions of his works that still exist today.

Plato is another figure in history whose works are referenced still. The earliest copy of Plato’s work is one thousand and two hundred years removed from the date which the original was written. There about seven versions of his work. Classical historians are very happy with that and deem these documents reliable.

What about the overwhelming number of differences in these New Testament manuscripts? Surely that affects the reliability.

How reliable were the scribes? Bart Erhman, a New Testament scholar, has claimed that ‘There are more differences in our manuscripts than there are words’2. There are roughly 138,000 words in the original Greek version of the New Testament. The number of total discrepancies that have been found across these manuscripts are currently over 400,000! Doesn't this dispel reliability?

Yet it depends largely on what these differences are. Over 99% of them are simple, scribal, penmanship blunders. A word might have been missed out, a spelling error would have crept in or the word order might be flipped - ie, one scribe may have written ‘Christ Jesus’ instead of ‘Jesus Christ’ from one copy to another. In that sense, the presence of these errors do not actually change the meaning of a sentence the original writers intended.

Does the Bible defend itself on its reliability?

The Bible itself acknowledges that some would find its teachings were hard to understand and prone to distortion. This quote is taken from the New Testament in a letter written by Peter, a disciple of Jesus:

‘Bear in mind that our Lord’s patience means salvation, just as our dear brother Paul also wrote you with the wisdom that God gave him. He writes the same way in all his letters, speaking in them of these matters. His letters contain some things that are hard to understand, which ignorant and unstable people distort, as they do the other Scriptures, to their own destruction.’ - 2 Peter 3:15-16

It acknowledges that early Christians would struggle to understand their own sacred writings. Perhaps this might even be true for Christians today. However with each translation, scribes have prioritised preserving the accuracy of words over interpreting them to make them more understandable. This shows an understanding from the scribes that the text being transcribed is a holy document. Their manner is consistent with the very words they were transcribing such as the message in 2 Peter.

So is the Bible corrupt and untrustworthy?

No. The Dead Sea Scrolls are only a small part of what is a larger tapestry of evidence which suggest that the Bible is a remarkable historical document, survived through time with great accuracy to the original documents.

This article has attempted to raise some big questions about the trustworthiness of the Bible as a historical document. Why not read this remarkable old document for yourself?

Listen to the full episode with Gillian Asquith here. 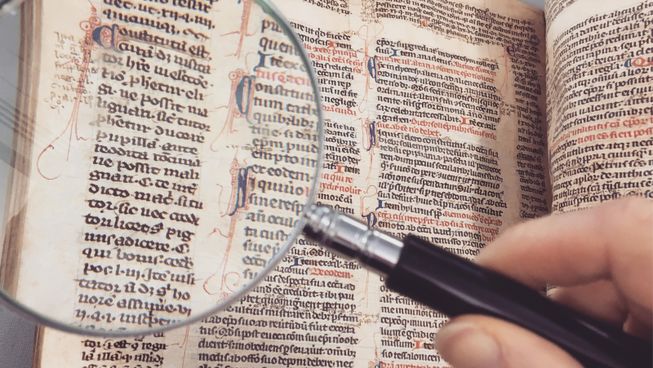 Why should atheists read the Bible?

Isn't the Bible full of contradictions?

We're always talking about it

Jesus is the Question

Bigger Questions
12 Oct 2018
A poem by Cam Semmens. Something to get you to think.

Five ways in which Netflix reveals something bigger

Isn't the Bible corrupt and untrustworthy?