How Dan Andrews can get some sleep

It’s tough being a leader in a time of crisis.

There is no question that Victorian Premier Daniel Andrews is facing a crisis. In fact it’s been described as a one-in-100 year event as Coronavirus cases in Victoria continue to rise.

Victoria now has over two thirds of all of Australia’s Covid19 cases and the number of deaths continues to rise. Andrews has overseen dramatic lockdowns, restrictions and curfews leading to inevitable business closures affecting the freedoms and economic welfare of millions of people. The quality of his leadership is under attack from a variety of sources, indeed one newspaper led with the headline: Dan-made disaster and he has apparently even received death threats!

The big question which faces him every day: given all of this distress and concern, how can he sleep at night?

It would appear that he doesn’t.

Indeed, last week his wife Catherine posted a photo on Instagram with the caption: This man does not stop.

Patrick Durkin wrote in the AFR,

Each night about 10pm, Andrews receives a call from health officials to reveal "what's on the board" ahead of the next day's numbers. Lately those numbers, which Catherine says "keep Daniel awake at night and keep him working until all hours of the morning" have been much worse, as the death toll continues to mount.

Yet it appears this kind of work is expected of our leaders. It seems that our society expects and even demands our leaders to work continuously. Daniel Andrews faces the media each day, every day for an update. He has been present for a media conference for the last 35 days and our media and our culture would be critical if he did take a day off.

There was backlash against Brett Sutton, chief health officer taking a day off, despite working incredibly hard. This was the exchange:

Mr Andrews: I think Brett Sutton is having a well-earned break today.

Reporter: Having a well-earned break on a day of more than 700 cases?

Even though Andrews is exhausted and sleep-deprived people are saying it’s his job. It’s his duty to see this through. See this Twitter exchange...

Dan Andrews looking and sounding bloody EXHAUSTED. He just mentioned his "lack of sleep". Clearly the man needs rest. Do your bit, Victorians, and we can all get back to normal. And give the man a day off.

It’s his job , that’s what the ppl voted for him to do the job.. he gets paid big dollars regardless of how exhausted or not it’s his duty and he needs to see this through .... he can rest once this is pandemic is under control

Our world doesn’t like sleep. We work, even though exhausted, to see everything through.

This is common in our culture. Our culture appropriates the maxim, You snooze you lose.

At the press press conference where it was announced that John Brennan was the head of CIA in the United States, US President Barack Obama said,

“I don’t know anyone who works harder than him. He once told me “I don’t do down time”. I’m not sure he’s slept in four years”

This is common in our world to ‘not do down time’ - it’s viewed as inefficient and lazy. Those who are responsible for our security shouldn’t sleep. Our leaders in the midst of a crisis shouldn’t sleep. They need to be on the job, working, constantly.

Yet, sleep is profoundly good and deeply important for us. Sleep deprivation is not good.

The record holder of the world’s longest period without sleep, Maureen Weston, reported hallucinations, paranoia, blurred vision, slurred speech and memory and concentration lapses at the end of her record breaking stint. Scientists estimate that, were such an experiment possible, you would die of lack of sleep before you die of lack of food.

Sleep is critical to human flourishing and wellbeing.

So given this, what drives our culture to want its leaders to not sleep - particularly in the midst of a crisis? Surely we would be wanting our leaders to get plenty of sleep in order to properly assess data, and make wise decisions.

Decisions made late at night in a sleep deprived state are hardly going to be better than those made after a good night’s sleep?

So why the paradox? Why does our culture deny sleep to those who probably need it most?

We explore this in our recent Bigger Questions show on getting a good night’s sleep.

Our guest Andrew Laird highlighted that the lack of sleep and the desire to minimise sleep comes down to the feeling that the world depends on me and that I am ultimately in control of the world.

Indeed, one person tweeted this in response to Dan Andrews’ lack of sleep:

Maybe he is tired cos he is a control freak. maybe he can’t trust anyone else in the gov to do get the job done

This is perhaps a little harsh, but perhaps there is some uncomfortable truth in this. Perhaps deep down we do love control and we can’t entrust our problems to others?

A pathway to better sleep

This is where the Bible offers a better way. The Bible recognises that there are distresses and responsibilities, but yet offers a pathway to genuine rest without abdicating responsibility.

The Psalmist in Psalm 4 (part of the Old Testament of the Bible) like Dan Andrews, and others in leadership had plenty on his mind. He is afflicted with great distress - indeed he cries out in verse 1,

Answer me when I call to you,

Give me relief from my distress;

have mercy on me and hear my prayer.

We’re not entirely sure what was afflicting him, but there is no doubt he is struggling with concerns and anxieties greater than him - he possessed all the ingredients for a bad night’s sleep.

Yet the Psalmist continues to reflect on his situation and in verses 6-8 says,

Let the light of your face shine on us.

Fill my heart with joy

when their grain and new wine abound.

In peace I will lie down and sleep,

for you alone, Lord,

make me dwell in safety.

He reflects on the goodness and the power of God. He trusts a good sovereign God who is bigger than him and who cares for him.

Our modern culture fails to acknowledge anyone bigger than us, let alone anyone who cares. If we are to solve a problem it’s completely up to us, we can’t slumber or sleep because otherwise we won’t be able to achieve anything.

Yet the Psalmist recognises that God is greater than us, we can trust him and he is always working. The promise of Psalm 121 is that:

He will not let your foot slip—

he who watches over you will not slumber;

indeed, he who watches over Israel

will neither slumber nor sleep.

This gives peace and reassurance that because God always works, we can rest, we can sleep, because God watches over the world.

The Psalmist doesn’t ignore his problems, he is full of distress, yet he can rest and sleep, because God is good, is in control and cares and hence the Psalmist can trust him.

So perhaps some advice to Dan Andrews. Yes, work hard, yes, take responsibility, but take a day off, I won’t judge you, I think it will help you make better decisions. But more importantly, rest and trust in a good and sovereign God who continues to work and watch over Victoria even when you sleep. 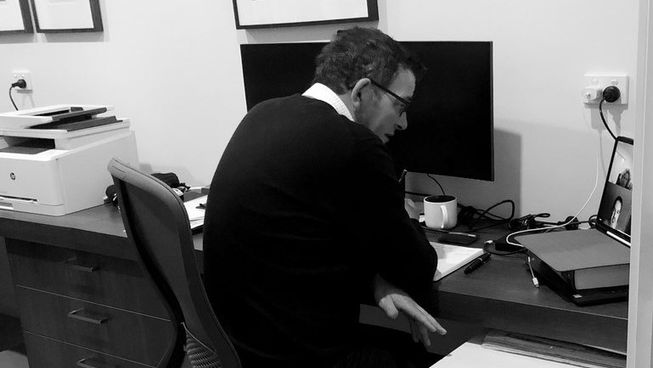 So true, we don't sleep

So true, we don't sleep because we think everything depends on us but it doesn't. Sleep is good.

Hi Lydia. Great to hear from you and great reflections. Yes, sleep is good.

How can we get a good night's sleep?