Many think that Slavery was abolished in the 19th Centrury, yet slavery is alive and flourishing in the world today. Hear the gripping story of an investigator who goes to the darkest places on earth to confront the modern day slave trade. A confronting and powerful story.

Our guest: Investigator V (name changed for confidentiality reasons). V is a human trafficking investigator with International Justice Mission - an organisation fighting to end slavery in the world today. V is an experienced undercover investigator having previously worked with the US Marines and in police anti-trafficking operations.

So what exactly does International Justice Mission do?

A smaller question for you today, about the abolition of slavery.

Now perhaps there is an assumption that after the slavery abolition in 1833 that slavery has been abolished across the world and there is no slavery today at all - but this isn’t quite right is it? How many slaves are there?

But how can this be? Hasn’t slavery been abolished?

So what are the circumstances that makes someone a slave?

What is the life of a modern day slave like?

Now, you do confront slavery in your job with International Justice Mission - what do you do? What have you seen?

You’ve previously worked in the US military and in anti drug trafficking operations with the US police. Is this more or less dangerous?

So Investigator V, what motivates you to do this awful work in confronting slavery today?

Now International Justice Mission does derive inspiration and motivation for its work from the Bible and the injunction from the Old Testament prophet Isaiah, in Isaiah 1:17

Learn to do right; seek justice.

Take up the cause of the fatherless;

plead the case of the widow.

So investigator V, how have you seen this motivate and affect the work of International Justice Mission?

So you see what you’re doing as seeking justice and taking up the cause of the vulnerable, the fatherless and widow?

So do you think it surprising or appropriate that the Bible motivates a modern anti- slavery movement?

Some critics of the Christian faith have dismissed the Bible because they say that the Bible condones and encourages slavery. What do you make of this?

You have seen awful things by confronting the modern slavery movement. Why do you think people can be so cruel?

But doesn’t this create a tension - for aren’t the slave owners, the oppressors, and the users those who create demand for slaves, also human? So what does this mean to be human?

You confront the very worst of humanity - what is the impact has it had on you? How has that changed you?

So Investigator V, why confront slavery? 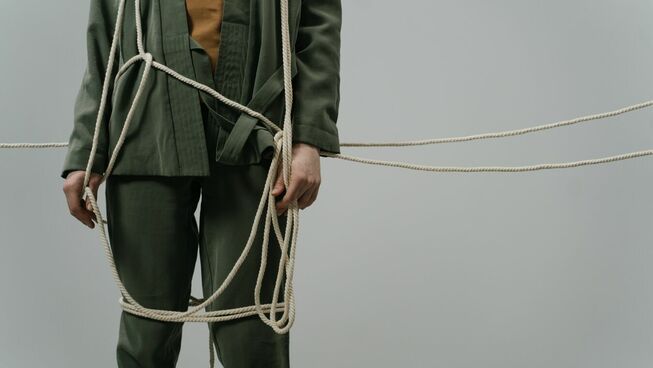